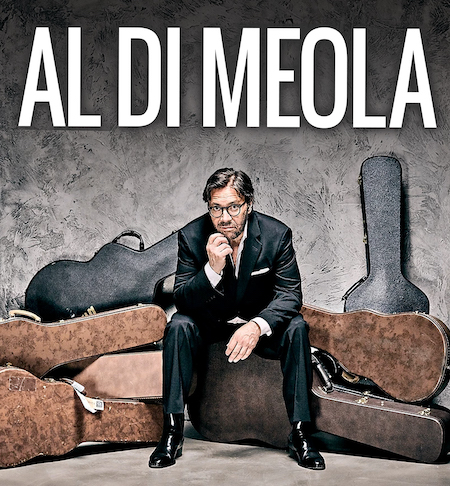 Al Di Meola is a guitarist’s guitarist, but those who listen to his music, in concert or on recordings, are the fortunate recipients of the genius his peers have long recognized. In a career spanning four decades, he is considered a pioneer of blending world music and jazz. Di Meola has earned three gold albums and countless awards, including induction into Guitar Player’s Gallery of Greats and the prestigious Montreal Jazz Festival’s Miles Davis Award, which celebrates an artist’s body of work and influence in giving new life to the jazz idiom. That 2015 award would have been the capstone for many careers, but in 2018, Di Meola released Opus, an album that again refocused his art.

Di Meola grew up in New Jersey and played the guitar as a kid. When he discovered the music of Larry Coryell, whom Di Meola calls “The Godfather of Fusion,” he fell in love with jazz, blues and rock blended together. He enrolled in the Berklee College of Music and when a band tape was passed along to Chick Corea, the 19-year- old was asked to join his supergroup, Return to Forever. The young man was on his way. “I was very impressed with someone merging all the idioms,” he said. “I was growing up with rock and pop, absorbing jazz and had a slight country phase. Larry seemed to embody all of these elements.”

Di Meola has a reputation for rehearsing for hours on end, a regimen he began early on. “When I went to Berklee, I wanted to make it,” he said. “I thought I should practice as much as possible. Now I find it meditative and relaxing. My first professional gig with Chick Corea was at Carnegie Hall. I got a call and I was in shock. It was a dream come true. I told my parents I was playing Carnegie Hall and my father thought I was joking. I was nervous beyond belief and it was the opportunity of a lifetime. The musicians were already legends, even then, and Return to Forever was my favorite band. They had a strong belief in me, but I didn’t have it yet. I did have the ability to read long charts and had good formal training.”

Di Meola has had success with both the acoustic and electric guitar and he loves them both. For the past 20 years, he has played more acoustic guitar, a legacy of the type of ear damage many musicians have. The strong acoustic following he had from his early years cushioned the transition back to acoustic. “Playing acoustic separates the men from the boys,” he said. “You can’t get away with a lot. With electric, there’s the volume and you can get away with being sloppy.”

Di Meola is a fan of the music of all genres and two of his favorite artists or groups are the tango composer and musician Astor Piazzolla and The Beatles. That seemed an eclectic set of favorites. “Piazzolla was the father of modern tango and I’ve done a lot of his work,” Di Meola said. “We had become good friends and his influence was extreme.” In fact, Piazzolla and Di Meola were going to embark on a project together just before the former’s death in 1992. Di Meola has recorded an album of Piazzolla’s work. “Not a day goes by that I’m not involved in thinking about Piazzolla or The Beatles,” he said. “When we first heard The Beatles’ music, there had been nothing like it. They had an amazing evolution in the 1960s and just got better and better. When they disbanded, I lost interest in their solo careers, but I rediscovered them. I realized their music was incredible and way ahead of its time, with an aesthetic beauty that is overshadowed as they’re just thought of as a pop band. They had a lot of depth.”

Di Meola’s 2013 release, All Your Life, recorded at Abbey Road Studios, had him revisiting the music of The Beatles. A virtual one-man show, it features Di Meola interpreting 14 Beatles tunes in the stripped-down setting of strictly acoustic guitar. “I really credit The Beatles for the reason why I play the guitar,” he said. “That was a major catalyst for me to want to learn music, so their impact was pretty strong.”

At this season of his life, Di Meola finds himself in a good, if unexpected, place. He has a happy marriage and a young child. “For the first time in my life, I have written music being happy,” he said. “I’m in a wonderful relationship with my wife; I have a baby girl and a beautiful family that inspires me every day. I believe it shows in the music.”

In 2020, Di Meola revisited The Beatles with a retrospective of his nearly 50-year career in the album, Across the Universe. Here he presented 14 Beatles songs with virtuosic arrangements and creative interpretations with a larger-scale, full production featuring orchestrations balanced with lavish acoustic arrangements and electric guitar.

Current projects include an autobiography and a solo guitar recording of 13 new compositions. He is also proud to announce the 2022 release of Saturday Night in San Francisco, from the 1980 tour of the Guitar Trio with John McLaughlin and Paco de Lucia.

For Al Di Meola, this is the best of times. He’ll follow the sun and see where it takes him.
Contact & CONNECT