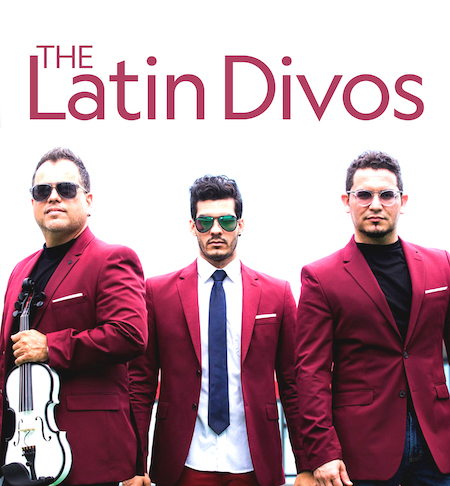 Founded in 2017 by violinist and saxophonist Will Corujo, the three young Cuban musicians of the Latin Divos were immersed in the arts and music of an island where someone is playing on every corner. Joined by Ernesto Cabrera and Fernando Gonzalez, the Latin Divos take Latin pop, traditional opera and timeless classics and “Divo-size” them with a Latin sound. That sound includes Fernando’s deep, timeless baritone, Ernesto’s wit, humor and smile and Will’s amazing musicianship.

A talented group of multi-linguists, the Latin Divos sing in Italian, English, Spanish and French and have performed in venues and theaters in the United States, Spain, Mexico, Cuba, and Panama. They have shared the stage with some of the biggest names in Latin music, including Meme Solis, Alvaro Torres and Alejandro Jaen. Jaen, a composer, singer and member of the Latin Songwriters’ Hall of Fame, asked the group to participate on his latest album and composed their first original single, “Hoy Podras Volar.”

The Latin Divos are just getting started and they love bringing their audiences along for the ride. Come hear some of the world’s great music.