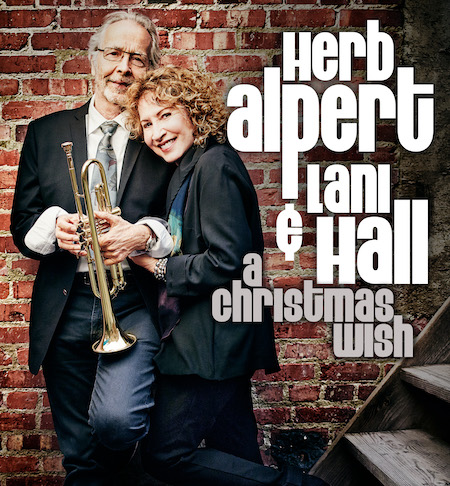 Herb Alpert was drawn to the trumpet when he heard it played in a music appreciation class at his elementary school. He was 8. That early love led him to a legendary career that includes five Number One hits, nine Grammy awards, the most recent in 2014, 15 Gold Albums and 14 Platinum ones. At one point Alpert and his band, The Tijuana Brass, outsold the Beatles two to one. They had the unmatched feat of simultaneously having four albums in the Top 10 and five in the Top 20. Songs like “A Taste of Honey,” “This Guy’s in Love with You,” and “What Now, My Love,” propelled Alpert and The Brass to the top of the charts again and again.

An entrepreneur as well as musician, Alpert and his friend, Jerry Moss, founded A & M Records in a garage in 1962. It became one of the most important independent labels in the industry. Alpert and Moss were inducted into the Rock and Roll Hall of Fame in 2006 and are a part of the Grammy Museum’s “Icons of the Music Industry” series. In 2013, Alpert was awarded the National Medal of the Arts by President Obama for his contributions to music and philanthropy. A talented painter and sculptor, his works are displayed in galleries and museums in this country and abroad. “There is a certain satisfaction and energy that comes from playing the horn-a feeling that I am really in my element,” he has said. “I am passionate about what I am doing, whether painting, sculpting, or playing the trumpet. I am just trying to create whatever comes out in the spontaneity of the moment.”

In 1966, A & M signed Sergio Mendes and Brasil ’66. Alpert met their lead singer, Lani Hall, and the two were married in 1973. Hall has recorded 22 albums in three languages, sang the title song for the James Bond film, Never Say Never Again, and won two Grammy Awards for performing and producing. The two have been touring together since 2006. Hall is also an author. Her first book, Emotional Memoirs & Short Stories, compiles ten short stories with a connecting personal narrative. With the release of her audiobook, she mixed her two forms of creative expression together with a musically-scored soundtrack as a backdrop to the stories. With this work, Hall provides a rare glimpse at the double-edged sword that is the life of an artist.

Alpert and Lani have assembled a top-flight group to accompany them, including keyboardist and vocalist Bill Cantos, bassist Hussain Jiffry and Michael Shapiro.

Bill Cantos also tours with Burt Bacharach and he has toured and recorded with artists including Lea Salonga, Ramsey Lewis, Phil Collins, Kirk Whalum, Leon Russell and Elton John. His most recent solo album is New Standards for the New Millennium, a collection of original songs written in the style of classic standards. He was honored with a Distinguished Alumni Award from the New England Conservatory of Music.

Hussain Jiffry is a musician, writer, arranger, producer, engineer and music educator. He won a Grammy in 2014 for engineering Herb Alpert’s CD, Steppin’ Out. He has recorded or performed with Michael Bolton, the Atlanta Symphony, Michael McDonald, Dionne Warwick, Chaka Khan, Whitney Houston and The Four Tops.

Michael Shapiro has spent 35 years as a drummer, percussionist, producer and educator. A self-taught musician, he has worked with will.i.am, Justin Timberlake, Macy Grau and Sergio Mendes, with whom he has recorded many albums, including 1993’s Grammy-winning Brasileiro, 2006 Latin-Grammy-winning Timeless and 2010’s Latin- Grammy-winning Bon Tempo. His movie soundtrack credits include Shrek the 3rd, People Like Us, and The Jersey Boys. He teaches at UCLA.

Come join them to welcome in the holiday season with an evening of holiday cheer.
Contact & CONNECT