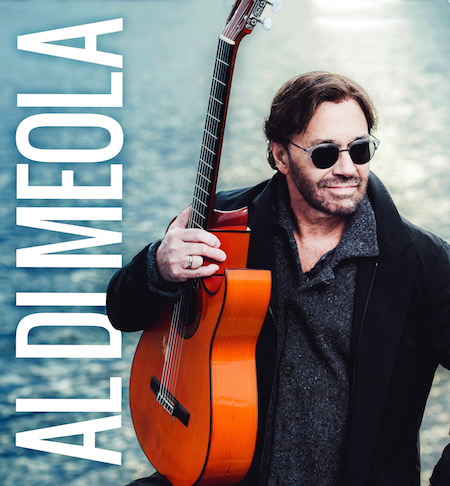 Al Di Meola's celebrated career has spanned four decades and earned him critical accolades, three gold albums and more than six million in record sales worldwide. A bona fide guitar hero - winning more awards than any guitarist living or dead - and prolific composer, he has amassed over 30 albums as a leader while collaborating on more than a dozen or so others with the likes of Chick Corea, Stanley Clarke, Lenny White, John McLaughlin, Paco de Lucia and violinist Jean-Luc Ponty. While his dazzling technique on both acoustic and electric guitars has afforded him regal status, the depth of Di Meola's writing along with the soulfulness and the lyricism of his expression on guitar have won him legions of fans worldwide beyond the guitar aficionado set.

Growing up in Bergenfield, NJ with the music of Elvis Presley, The Ventures and The Beatles, Di Meola naturally gravitated to guitar as a youngster and by his early teens was already an accomplished player. “I used to practice the guitar eight to ten hours a day,” he told Down Beat. “And I was trying to find myself, or find the kind of music that suited where I was going with the guitar.”

His earliest role models in jazz included guitarists Tal Farlow and Kenny Burrell. But when he discovered Larry Coryell, whom Al would later dub “The Godfather of Fusion,” he was taken with the guitarist's unprecedented blending of jazz, blues and rock into one seamless vocabulary on the instrument. In 1972, Al enrolled at the Berklee College of Music in Boston and by the second semester there began playing in a fusion quartet led by keyboardist Barry Miles. When a gig tape of that band was later passed on to Chick Corea by a friend of Al's in 1974, the 19-year-old guitarist was tapped to join Corea’s fusion supergroup Return to Forever.

Al started up his career as a solo artist. His 1976 debut, Land of the Midnight Sun, was a blazing showcase of his signature chops and Latin-tinged compositions. Over the course of six more albums with Columbia Records – Elegant Gypsy, Casino, Splendido Hotel, Electric Rendezvous, Tour De Force and Scenario – Al established himself as an influential force in contemporary music.

In 1980 Friday Night in San Francisco, with Paco De Lucia and John McLaughlin became a landmark recording that surpassed the four million mark in sales. The following year, 1981, Di Meola was inducted into Guitar Player’s Gallery of Greats after five consecutive wins as Best Jazz Guitarist in the magazine’s Readers Poll and winning best album and acoustic guitarist for a total of a record eleven wins.

A pioneer of blending world music and jazz, the guitar great continues to explore the rich influence of flamenco, tango, Middle Eastern, Brazilian and African music with his World Sinfonia, an ambitious pan-global group that he formed in 1991. Their exhilarating world music fusion has released 2000’s The Grande Passion, 2007’s Live in London, 2011’s Pursuit of Radical Rhapsody and the 2012 DVD, Morocco Fantasia. His album, 2015’s Elysium, finds the guitar great blending the lush tones of his nylon string Conde Hermanos acoustic prototype model and a ’71 Les Paul electric in a collection of songs that are at once invigorating and alluring. In 2015, he was honored as the 22nd recipient of the Montreal Jazz Festival’s Miles Davis Award, created to honor a great international jazz musician for the entire body of his or her work and for that musician’s influence in regenerating the jazz idiom. At age 63, this guitar hero seems inspired to begin a new chapter in his career with the release of OPUS in February 2017.

During a 40-plus year career marked by hugely influential recordings and worldwide tours, Di Meola has regenerated the jazz idiom three times over while dedicating himself to his art.