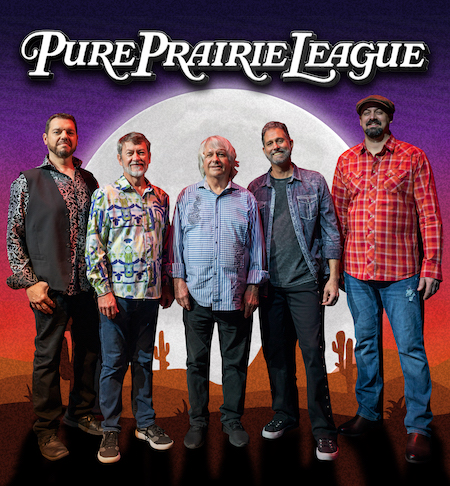 They took their name from an obscure 19th century Temperance Union mentioned in the 1939 Erroll Flynn film Dodge City.  It seems fitting as Pure Prairie League is a distinctly American band founded in Columbus, Ohio, in the mid-‘60s by a group of friends playing cover songs.

The group’s eponymous first album, featuring the Norman Rockwell/ Saturday Evening Post cover that introduced fans to Pure Prairie League’s mascot, the cowpoke, “Sad Luke,” was called a “major early influence in the emerging popularity of country-rock music.” The sophomore album, the multi-platinum Bustin’ Out, had the classic Craig Fuller song, “Amie” and their third album, Two Lane Highway featured Chet Atkins, Emmylou Harris and Johnny Gimble.  Pure Prairie League had five consecutive Top 40 LPs in the 1970s and added a sixth in the 1980s. Songs like “Two Lane Highway,” “Let me Love You Tonight,” and “Early Morning Riser” helped define the country-rock sound. A reviewer wrote, “Pure Prairie League’s sound combines sweet memories with edgy, contemporary muscle. Their vocals are as strong as Kentucky moonshine and the musicianship and performance skills are as sharp as a straight razor.”

“People come to hear the music the way it was played back then,” said Craig Fuller, the band’s founder, who has occasionally toured with the group. “We may have improved on fidelity, but when we do a song off one of our records, we do it just the way it was recorded. “

Perhaps the words of a reviewer from Country Music Online said it best: “PPL does what it’s always done; they remain true to themselves, creating a sound that doesn’t compromise their vision, yet manages to capture the ears of their adoring ‘prairie dog’ fans, as well as a new legion of listeners. If there is a formula to PPL’s longevity and success, that may very well be it.”

Whether you’re a prairie dog or a newcomer to the music, you’ll love the sound of music played the way it used to be. Whether they’re “Pickin’ to Beat the Devil” or taking you down the “Two Lane Highway,” PPL is a sure-fire good time.
Contact & CONNECT