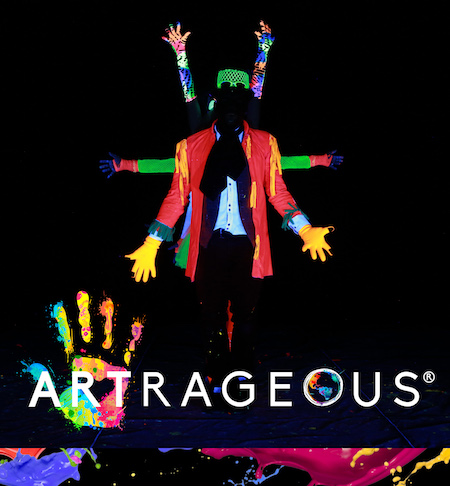 That’s Artrageous, the troupe of multi-talented live performance artists, world-class singers and recording artists, highly-trained dancers, audience motivators and veteran musicians from the high desert of New Mexico. Their high energy performance is a combination of all the arts on one stage, combined with humor and interaction in a frenzy of movement and color.

Artrageous has a passion for art and community and the performers bring the message of the arts as an integral and valuable part of human existence to the stage, leaving their audiences of all ages singing, dancing and clapping along.

When they enter the World of Artrageous, theater-goers are greeted by troupe members and encouraged to choose a souvenir finger light ring and participate in activities where they can win prizes and create their own original art works on a troupe member. Artrageous actors teach audience members dance moves they will use later and pick brave volunteers to join the troupe on stage for a special number. Their custom soundtrack plays while creative art quotes and Artrageous facts (they have played 49 states - hello, Delaware) are displayed on the video screen, leaving the audience wondering what will happen next. Every scene or musical number includes some audience participation. Have no fear, audience members who are more reserved can express themselves by singing along and using their finger lights to create a light show. There is something for everyone, whether you are a performer at heart or just want to be thoroughly entertained.

What will you see at an Artrageous show?

Artists, using hands, brushes and other objects create art on giant canvases while the audience tries to guess what each will be. Lines and strokes become portraits of icons in a matter of moments. All the while, live musicians perform everything from pop to country to Artrageous’ original music. Artrageous dancers incorporate the dance moves the audience learned before the show and the audience can’t help but dance in the aisles and their seats. The troupe brings their puppet, Howard, out and he takes the audience on an imaginative dream through a world of blacklight where masterpieces are created by a team of artists as the paintings seem to appear out of thin air. People and paintings seem to float in Howard’s blacklight world.

At the end of the performance, the entire audience is invited on stage to interact with the art creations made just for them. The audience can view the art created during the presentation and meet the troupe and take photos. A signature of Artrageous is Splatter! After the show, audience members are invited to bring up a favorite t-shirt, hat or pair of shoes and get creative as they step into the Splatter Station and have one of the artists turn the gear into a custom art piece.

This is a show that stretches the boundaries of art and of the imagination. It expands the palette and goes beyond the canvas.