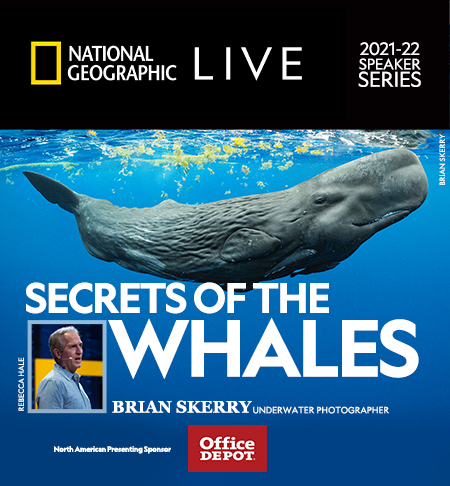 Celebrated National Geographic explorer and photographer Brian Skerry has spent nearly four decades exploring and documenting the Earth’s oceans. With his latest project, Secrets of the Whales, you will dive deep into the groundbreaking science of whale families-and their startling human parallels. Skerry turns his lens to one of the world’s most beloved animals to illuminate startling new insights into their lives and culture.

For this project, Brian Skerry spent more than two years in 24 locations around the world, capturing remarkable images and video for a landmark National Geographic book, magazine story and television series, Secrets of the Whales. You will hear his behind-the-scenes stories and get an inside look at the groundbreaking science of whale culture. Discover the extraordinary communication skills and intricate social structure among four different species of whales, from the international cuisines of orcas to families of beluga whales playing at their “summer resort.” See the multi-generational childcare systems and female-led families of sperm whales. Explore the culture of singing competitions among humpback whales.

Skerry began his career shooting shipwrecks in New England. Since 1998, he has been a contributing photographer for National Geographic, covering a wide range of subjects and stories.  Soon, he began to ask for stories on ocean-related issues that showed both the magic and the dark side of the ocean, from the harp seal’s struggle to survive, to the staggering decline in the world’s fisheries to damaged coral ecosystems rebuilding themselves. He has shown the world that its actions have consequences, whether it’s by choosing not to wear harp seal fur or having tuna for dinner.

Skerry dives eight months of the year, often in extreme conditions beneath Arctic ice or in predator-infested waters and has lived near the bottom of the sea to tell the oceans’ stories. A founding member of the International League of Conservation Photographers, his work is proof that photographs can make a difference. His images have helped sway policy-makers to implement marine protected areas and to pass legislation that will have a lasting impact on the world’s oceans.

Skerry was named a National Geographic Society Photography Fellow in 2014 and a National Geographic Society Storytelling fellow in 2017. He was named a Nikon ambassador in 2015 and Rolex National Geographic Explorer of the Year in 2017. National Geographic has named one of his photographs among their 50 Greatest Photographs of All Times. A cover story in February 2017 focused on protecting special underwater ecosystems in U.S. waters, and during the coverage, Skerry produced the first images of a sitting U.S. president underwater. He is the only photographer to win the prestigious Peter Benchley Award for Excellence in Media and has appeared on The Today Show and on CBS’s This Morning. The acclaimed photographer also received the 2019 NOGI Award for the Arts from the Academy of Underwater Arts and Sciences, an award frequently referred to as the “Underwater Oscar.” He has given his presentations at TED, Harvard and London’s Royal Geographic Society and is the author of 12 books, including the newly released Secrets of the Whales.

Secrets of the Whales is much more than a nature presentation. Through Skerry’s mesmerizing work, we can uncover what these majestic creatures can teach us about ourselves and our planet. What he has to say is something no one who loves the planet and the animals that share it with us should miss.
Contact & CONNECT