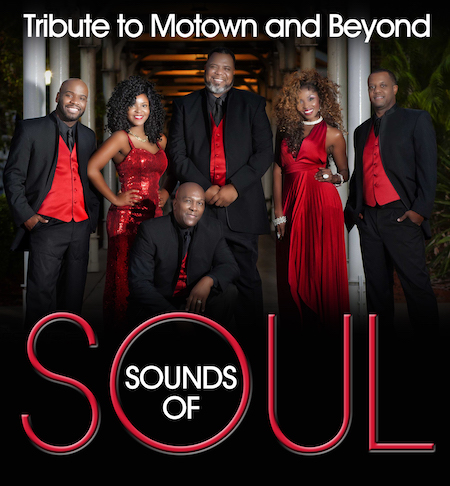 Berry Gordy started the record label that came to be known as Motown 61 years ago. It’s hard
to understate the impact that label and that music had on American culture. Since 1996, the
Sounds of Soul has brought to life the stars of Motown and those who followed. The group is
known for its choreography, distinct harmonies and flashy, upscale stage personas and with a
grueling schedule that averages more than 450 shows a year, they continually remind
audiences that great music has no boundaries. The show is a combination of Motown classics
mixed with some of the greatest songs of all time.
The six artists who make up the Sounds of Soul bring great vocals, slick dance moves and snazzy
costumes to an exciting, high-energy show that spotlights Motown and The Temptations, The
Four Tops, Aretha Franklin, Whitney Houston, The Supremes, Lionel Richie, Tina Turner, Barry
White and more. They are regularly featured on cruise ships and were the big hit at a “Motown
Excursion” sponsored by CBS Radio. The Sounds of Soul was the first sold-out show at Pinellas
Park Performing Arts Center and the group has performed from Los Angeles to the French
Quarter, at the American Airlines Arena in Miami, the Sun Dome in Tampa Bay and the Registry
Hotel in California. They have shared the stage with The O’Jays, Bobby Brown and funnyman
Sinbad. They have also appeared on the internationally syndicated show Dance Connection.
This is a show with astounding vocals, stylish dance moves, flashy, upscale stage personas and a
whole lotta soul.

You’ve heard it through the grapevine and you’ll be dancing in the streets. Don‘t miss them.
Contact & CONNECT